This is still the way the majority of egg donation is done in the United States and around the world. However, in recent years advances in egg freezing technology have allowed the option of using frozen instead of fresh eggs.

Egg freezing has improved significantly over the past several years due to fine-tuning of freezing and thawing protocols. Thawed egg survival and viability is much better than it was in the past. These improvements now should allow for reasonable pregnancy and live birth success rates using frozen donor eggs.

Recently there has been a proliferation of “egg banks” that recruit egg donors, have their eggs frozen and then sell them to recipient couples for their egg donation cycles. Some of these businesses are claiming to have high success rates from the thawed donor egg cycles.

However, buyer beware – egg banks are not required by law to report success rate data to the government like fertility clinics are. Their claims are not currently subject to on site inspection and validation. I believe many of the claims of high success rates made by donor egg banks are misleading and therefore untrue.

Egg freezing is far from perfect but using frozen donor eggs instead of fresh donor eggs can have some potential advantages for the recipient couples.

The live birth success rates using frozen frozen donor eggs at this time are lower than the success rates with fresh donor eggs. This is true regardless of the untrue statements made by some donor egg banks.

The cost per cycle will certainly be lower with frozen donor eggs. At this time a reasonable estimate (for our clinic) is about 50% for a live birth rate if 2 embryos are transferred after thawing frozen eggs, compared to 85% in our fresh donor egg program when 2 are transferred.

The Society for Assisted Reproductive Technology (SART) has the data on egg freezing outcomes from clinics that have been doing it. However, they are not reporting it publicly at this time. Apparently, the powers that be at SART have not yet (as of December 2013) been able to decide on how to report outcome data for frozen egg treatment cycles. It seems this would be simple. However, maybe nothing is simple with the politics of dealing with hundreds of fertility clinics.

So for now, accurate and validated pregnancy and live birth success rates for frozen egg treatment cycles using the patient’s own frozen eggs or using frozen donor eggs are an unknown. 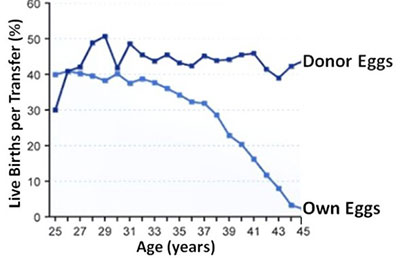 Sometimes, the best option is to use frozen donor eggs to become pregnant.

Older women can achieve similar pregnancy rates as younger women if they use:

The benefits and advantages of using frozen donor eggs are plenty…

When age-related infertility is diagnosed, even a well planned IVF cycle may be ineffective in overcoming suboptimal egg quality and a negative outcome. This illustrates the overwhelming importance of egg vitality in achieving a successful pregnancy.